People watching — it’s an enjoyable pastime isn’t it?  Especially at airports. I love watching people coming and going at airports. I most enjoy watching arriving travelers; a spouse returning home from a business trip, a good friend coming for a visit or my favorite, adult children returning home with their own children met by excited grandparents.  I feel for the ones saying goodbye—holding on tight for one more hug, eyes moist with tears.  I like to imagine where people are going or where they have been (which isn’t hard to do when you are at the Orlando airport). A range of emotions is on display; nervousness, excitement, agitation, anticipation. There is always something interesting going on.

With two children living out of state and a calendar full of trips with my husband, I have had plenty of opportunities for this activity.  I am no different from the people I watch at the airport.  I am full of excitement and joy when I’m waiting for one of my children to walk off the shuttle to the terminal.  I probably appear slightly nervous or anxious when I’m traveling; are we late? do I have my passport?  When I’m taking one of my children back to the airport to return to their home, you would probably notice me trying to hold back the tears.

On a recent flight from the Edinburgh airport, I saw the cutest little traveler who tugged at my heartstrings.  She was a wee little thing, probably about a year and a half old.  She had chubby, apple cheeks, bright eyes with long lashes and the perfect little lips.  Dressed in pink from head to toe, including a small harness attached to a lead, she was ready to go.  Her mother was calm and collected, you could tell she had done this before.  She had everything her daughter would need for the flight.  Baby doll — check, snacks — check, nappies — check, blankie — check.

I soon saw the reason for the lead.  Momma and daughter were traveling alone and you could see a streak of independence in those bright little eyes.  She toddled over to the plate glass window to stare at the jet outside, not a bit concerned about the size or the noise or the crowd of people.  She caught my eye, stared deeply at me and gave me a shy wave.  That was my last impression of her but boy, did she set my heart in motion.

First of all, she was about the age of my daughter when she took her first flight.  It was across the country to Nevada for a ski trip.  Little did I know that was just the beginning of a love affair with travel for her.  Like the little girl in the airport, my own girl had a strong, independent streak — still does.  I told people when my daughter was in high school, I truly believed if given a passport and some money, she could get herself anywhere in the world.

Then my thoughts went to the mom.  “oh, momma” I thought to myself.  “Brace yourself, prepare your heart, I’ve seen that look before — this one is going to go far.  I don’t think she’s going to pick a university close to home.  You’ll probably be making many trips to the airport to pick her up or drop her off for her next adventure.  One day, you’re going to be visiting her in another country”.  But maybe she already knows.

Parenting isn’t easy on the heart.  When they are little, we imagine what our children will be like when they are grown; where they are going to go, what they are going to do.  Eventually, they leave the nest and it breaks our heart just a bit, even though we know it’s exactly how it’s supposed to be.  Then we find ourselves sitting in an airport spotting a tiny traveler who takes us back in time. 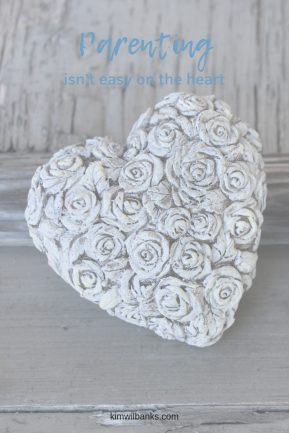 Is it just me or does anyone else out there wish they could go back in time and be with their little ones again?  Not for a do-over, just to hold them one more time.

Coping with the chronic illness MEcfs in Midlife. Helped by Faith, Creativity, Humour, Discussion and of course, Hope!