I just passed another major milestone.  On August 14, 2014, five years ago, I sat down at my computer and typed out my first blog post.  Five. Years. Ago.  I still remember the day.  My husband and I were at the beach.  I was sitting in front of the window staring out at a turquoise Gulf of Mexico as I wrote.  Talk about inspiring.

It seems fitting to share some reflections to mark the anniversary.

I recently saw an idea another blogger shared.  She shared the stories behind her top five blog posts of the year.  I’m stretching it out a bit.  These are the stories behind the most popular blogs I’ve written the past five years.  I’ve included the links if you would like to go back and read them.

This was a recent post, something I wrote about three months ago.  In this post, I shared about the passing of our beloved Corgi, Higgins.  He lived almost two years after his diagnosis of oral melanoma so we had a lot of time to think and mourn and prepare for his death.  Even so, it was heartbreaking when we had to say goodbye.  It was heartbreaking but I don’t regret for a minute the experience of owning and loving a dog.  It was a reminder that so much of life is taking a risk, the risk that our hearts may break from the hard things but more often than not, the risk is worth it.  The experience outweighs the pain.

This was the first blog post I wrote.  I contemplated and agonized over writing for at least two years before I finally dove in.  My nest was empty.  My two children were grown and working in other states.  The college years were over and they were not coming home.  I felt lost and unsure of what to do with myself.  I turned to writing to process some of the thoughts and feelings I was having about life in the empty nest.  If you have followed my blog for a while, you may have noticed a change or shift in my writing.  Although I still don’t love the empty nest, I am getting used to it.  One thing that has not changed is my Christian world view.  I still view my world and circumstances through the lens of Christianity.  I hope it is evident. 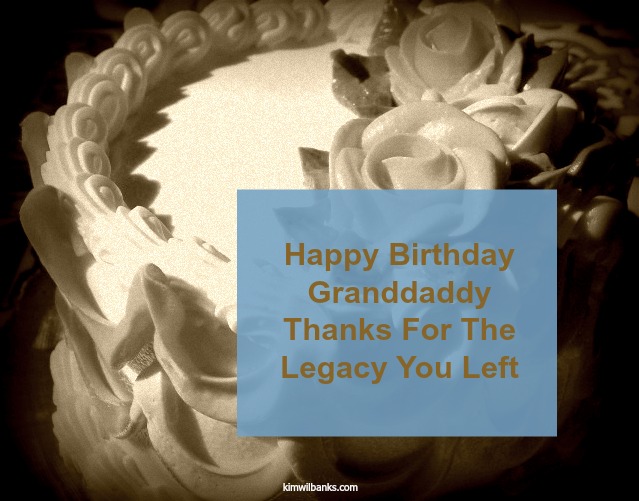 I tend to be very aware of my feelings toward family during the month of July.  Both of my mother’s parents were born in July.  We have a huge family reunion the last week in July, which I often write about.  Ironically, my grandfather died the day after our family reunion ended back in 1984.

I was very close to my grandfather.  Other than my parents, he probably had more influence on who I am than anyone else.  This blog post talked about the legacy he left for me and the rest of my family.

The images I used in this blog post are some of my all-time favorites.  We have a beautiful, curved staircase in our home.  I always took pictures of my two children on the stairs — in their Easter finery, on Christmas morning, before Cotillion, Homecoming and Proms. It was such a great focal point for photos to mark special occasions, even if it was just to model a new costume made by Grand-Mom.

From the time we moved into our house when our daughter was two-years old, I knew I wanted  a picture of her in her wedding gown when the time came for her to marry.  The first picture I ever took of her on the stairs, she was wearing a cream-colored dress.  We were on our way to the photographer to have pictures made for Christmas.  Flash-forward twenty-two years.  A good friend who is a professional photographer came over to help fulfill a dream.  He photographed my daughter in her wedding gown standing on the stairs.  He took several shots but there is one in particular that melted my heart.  I showed him the photo of my two-year old and he positioned my grown-up daughter the same way.  The image is stunning to me and sums up all the emotions of the empty nest.  I hope it tugs at your heart the same way.

My most-read blog was probably the one with the most substance but also the hardest for me to publish.  I don’t like conflict and I tend towards non-confrontation and the blog was in reaction to current events of the day.  More importantly, it was about society’s lack of reaction to what I considered alarming events.  It seemed that we as a society, we’re becoming more and more desensitized to the things which would have appalled us a decade or two earlier.  I compared it to our visit a few years ago to one of the concentration camps in Germany during World War II.  In many instances, the death camps existed next door to villages.  The villagers either didn’t know or didn’t care what was going on in their own backyard.  To not be appalled by fellow humans being mercilessly gassed to death was incomprehensible to me.  It seemed like we were not much different.  How could we not be appalled by what was taking place in abortion clinics?  Who could have imagined that a mere four years later, we would be discussing circumstances even more appalling?  I still say “wake up, America!”

I hoped you enjoyed this look back at some of my most popular blog posts.  If you would like to go back and read any of them all you have to do is click on the underlined title.  Thank you so much for taking the time to read my blog.  I truly appreciate it.  I hope that it brings a little bit of encouragement to your day.