Charlie Civility Cone Eason, Alberta Cora Eason Blanton, Mary Ann Blanton Edwards and me, Kimberly Ann Edwards Wilbanks. My Great-Grandmother, my Grandmother, my Mother and myself all have something in common. Each one of us were married at the age of 23!

My Great-Grandmother was born September 28, 1885 in Eason Crossing, Georgia. She married Stephen Kennedy Eason some time in 1908. The first of five daughters was born July 30, 1909 in Ochlocknee, Georgia. That would be my Grandmother, Alberta Cora Eason.

My Grandmother was 4 years older than my Grandfather. On March, 17, 1933, when she was 23 and he was 19, they crossed the Florida state line to marry in the Jefferson County Courthouse in Monticello, Florida. My Grandparents had 4 children, two sons and two daughters. My mother was their second child.

My Mother was born September 13, 1935 in Thomasville, Georgia. Her family moved to Florida when she was a young child. She spent her childhood and adolescent years in Lakeland, Florida. She married Andrew Wardlaw Edwards, Jr. on August 29, 1959. She was 23.

I was born December 5, 1960 in Lakeland, FL; the firstborn child of my parents. I grew up in Lakeland, Florida. When I first began to notice boys, my mother started telling me the story of “23”. She would tell me “your Great-Grandmother got married when she was 23, your Grandmother got married when she was 23 and I got married when I was 23.” All through my years of preadolescence, teens and into college I heard the story. My mother never came right out and said that I couldn’t get married until I was 23 but it was always implied. In my rebellious young adult spirit I said to myself (and probably to her too), “I may be 22 when I get married or 24 when I get married but I will NOT be 23”!

I began dating my then future husband, Jim Wilbanks the summer following my college graduation in 1982. We dated for about a year and a half and then as fate would have it, he proposed to me on my 23rd birthday! Now I had a dilemma. Do I wait at least a full year to get married just to spite my mother or do I give in and begin my married life at that preordained age? My husband and I got married April 6, 1984 in Lakeland, Florida. You guessed it; I was 23!

Our second child, a sweet baby girl, was born June 26, 1991. She knows the “23” story. I have tried not to mention it too often but she knows. My daughter is much more independent than I so I would be surprised if the tradition continues. But, she did turn 23 on her last birthday and she is in a serious relationship. I just wonder . . . 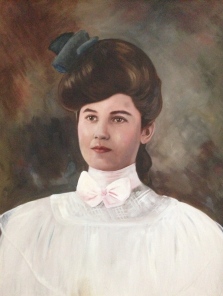 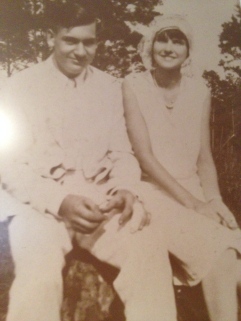 I love this picture of my grandparents taken when they were dating.

It was the 1980’s! Yes, I had the permed hair and the “Lady Di” wedding dress, giant sleeves and all!

Please check out another blog I follow, Holley Gerth Coffee for Your Heart <a href=”http://holleygerth.com&#8221; target=”_blank”><img

Coping with the chronic illness experiences of MEcfs in Midlife. Helped along by Faith, Hope, Humour and a fair amount of discussion. I like to talk!