My heart was racing as I got to church and parked my car.  My stomach was in my throat and my hands were trembling as I texted a quick message to my son.

“On campus, we’re being evacuated into a tornado shelter.  Mom, I saw it”.

April 27, 2011 is a day I will long remember.  It was the day a devastating tornado swept through Alabama, cutting an 80-mile-long path of destruction that left 64 people dead.   It was a day that taught me the meaning of trusting God completely.

Both of my children left their home state of Florida to attend colleges in Alabama.  My son was a senior at the University of Alabama in Tuscaloosa the day the tornado hit and my daughter was a sophomore at Samford University in Birmingham, about 60 miles away.

My husband and I learned early on that  springtime in Alabama meant tornadoes.  We were always on the alert when severe weather was in the forecast (often to the dismay of our young adult children).   We soon found out this particular Wednesday afternoon was going to be exceedingly different than any other stormy, spring day.

I was watching  The Weather Channel so I knew there was a line of thunderstorms advancing toward Tuscaloosa and that the city  was under a tornado warning.  I said a quick prayer and left my house, heading for church.  The radio in my car was set to a sports radio station airing one of my husband’s favorite shows, The Paul Finebaum Show.  At the time, the show was broadcast from Birmingham.

I don’t recall the exact words Mr. Finebaum used, but it was something like “Folks, there is a massive tornado about to hit Tuscaloosa and it doesn’t look good”.  I could tell from the tone of his voice that it was bad.  It was not the voice of a radio personality trying to sensationalize an event.

I said a quick prayer of thanksgiving that my son was on campus where there were strong buildings with tornado shelters and not at his house a few miles north of campus.

The thing I remember most was feeling utterly helpless.  My child was nearly 500 miles away in the midst of a monster  storm and there was not one thing I could do – except pray.

“Dear God, he’s yours.  I know how much I love him and I know you love him even more.  I’m placing him in your hands.  Please protect him”.

After the tornado barreled through Tuscaloosa, it made a beeline toward Birmingham, and my daughter.

“Oh dear God, this is too much!  Please protect my girl”!

A quick text message to her confirmed that she was in her dorm getting ready to take shelter.

The following hours were nerve-wracking but I did find out that both of my children were safe in the storm.  In a quick conversation with my son, he said that his typical 10-minute drive home took more than an hour because of the debris from the tornado.  It had passed just a few blocks from where he was sheltered on campus.  His neighborhood was spared as the tornado’s path was a couple of miles to the south.  Other neighborhoods were not so lucky.   Several subdivisions north of Birmingham were destroyed but, thankfully,  my daughter’s campus was not affected.

About a week after the tornado hit, my husband and I made a trip to Alabama to take some of my daughter’s things from her dorm room to my son’s house in Tuscaloosa for summer storage.  We were not prepared for the devastation we saw as we drove through the college town.  The pictures streaming over the news did not do justice to the reality. 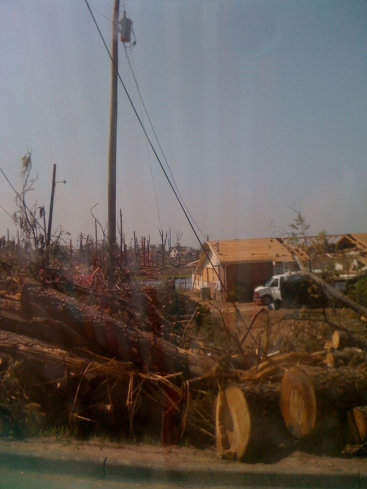 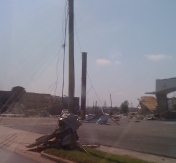 It was nearly impossible to recognize the main intersection on the way into town,  15th St. and McFarland Blvd.  There was debris everywhere . . . twisted metal, concrete rubble, trees and poles snapped in two.  An entire shopping center was destroyed as was a neighborhood across the boulevard.   Businesses along the road were flattened.  The path of the tornado left a raw, ugly scar etched diagonally across the city.  An apartment complex was the first thing intact next to a decimated neighborhood.  I learned that my son’s roommate was with his girlfriend in her apartment when the storm hit.

There was an emotional release with the realization of what could have been.

I was so thankful that my son and all of his friends, those who I had grown so fond of, were unharmed.  I was heartbroken for the moms and dads of the UA students who did not survive.  I felt compassion toward the ones who lived through the terror of that April afternoon and wondered how long their nightmares would last.

My son graduated in December of 2011.  Families accepting diplomas on behalf of slain students were a poignant reminder of the storm that hit eight months earlier.  The scars on the land and in the heart were still fresh.

We sold the house in Tuscaloosa in August of 2013.  As we left Tuscaloosa for the last time, we drove through an area that was hit particularly hard.  The trees that had been snapped in two sported new growth making them look like something from a Dr. Seuss book.  God was healing the land and making all things new.