They say that a man’s home is his castle.  Sometimes your home literally is a castle.  We found that out on our trip to Scotland this summer.

Castles are the stuff of fairy tales.  What child hasn’t read stories about a princess in a fairy tale castle?  Stories about kings and queens and princes coming to the rescue?

We don’t have honest to goodness castles here in America but Scotland has about 2,000 of them.  We had the good fortune to visit eight back in August.  Each one was different but all were amazing.  The age of each structure was enough to boggle the mind.  Some were publicly owned, some owned by trusts and some privately owned.  Several of them were still inhabited by family members.

I thought it would be fun to send your imagination back to the times of kings and queens, princes and princesses, lord and ladies.  The photos and descriptions of the castles I visited will  help spur your imagination.  See if you can guess which one was my favorite.

Sitting atop Castle Rock, Edinburgh Castle dominates the city skyline.  The oldest part of the castle, St. Margaret’s Chapel dates back to the 12th century.  King James IV built the Great Hall in 1510.  It was a royal residence until 1633 and after that became more of a military installment.  (Let that sink in — royals quit living in Edinburgh Castle before there were even 13 colonies.)

The Stone of Destiny and The Crown Jewels of Scotland are housed in this popular tourist attraction. You can find out more about Edinburgh Castle here.

Technically this isn’t a castle, but it kind of looks like one.  It has a very long history.  The home is built on the ancient gathering place of the Picts.  In the year 839, Kenneth Mac Alpin established himself as the first true King of Scots here.  All kings of Scots were crowned on Moot Hill seated on the Stone of Scone (or Destiny), including Robert the Bruce in 1306.  The original palace was built in 1580 and rebuilt in the early 1800’s.  It has been home to the Earls of Mansfield for over 400 years.  It is currently owned by the 8th Earl of Mansfield.  On a side note, you can enjoy a delicious scone (pronounced scon) at Scone (pronounced scoon).  Find out more about Scone Palace here.

This unique castle, white with black trim, is a Highland estate in Cairngorms National Park, Perthshire.  It is the ancestral home of Clan Murray and the Duke of Atholl.  The oldest part of the castle, Comyn’s Tower was built in 1269 and building was extended in 1530.  Queen Victoria and Prince Albert once visited this castle.  Did you know that Queen Victoria helped spark an obsession with the Scottish Highlands?  The castle is privately owned and has been opened to the public since 1936. Find out more about Blair Castle here. 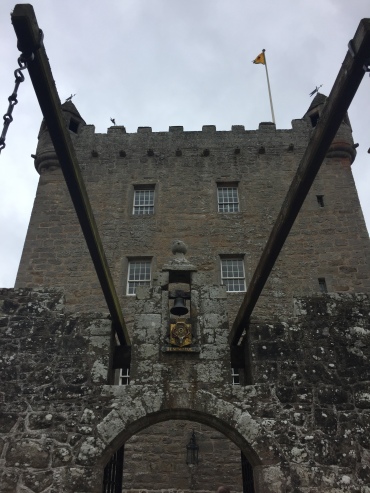 This lovely castle is in Nairnshire, not too far from Inverness.  It’s a true Highlands estate.  The tower was built in the 1200’s around a legendary holly tree. Additions were made in the late 14th century and up into the 1800’s. It is still the home of the Cawdor family, with the Dowager Countess Cawdor in residence.  Please click here then click on the welcome video, trust me. 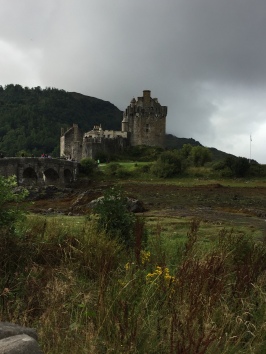 This castle in Kyle of Lochalsh, near the bridge to Isle of Skye, is one of the most iconic images of Scotland.  It has been in the MacRae clan since the 1300’s.  The castle was built for strategic defense on an island where three sea lochs meet.  It was in ruins for two hundred years after the Jacobite uprising of 1715. It was rebuilt based on a general outline of the original castle and an idea of what castles of the time period looked like.  Our docent told us that about ten years ago an old survey of the castle was found in Edinburgh.  It was surprisingly similar to how it was reconstructed.

We spend a lot of time in Banner Elk, North Carolina (as a matter of fact, I am typing this as I look out the window at the mountains) and the name MacRae is familiar.  Banner Elk is home to Lees MacRae College and MacRae Meadows is a part of Grandfather Mountain.  The nearby town of Linville was founded by a MacRae.  Each summer since 1956, Grandfather Mountain has hosted a Highland Games — it is one of our favorite events to attend.  There is always an honorary Chieftain of the games.  We were surprised to see photos of some Scottish MacRaes at the Grandfather Mountain Highland Games in the castle.  What a fun connection.  We also found on the extensive family tree the entry showing where two men moved to North Carolina in 1774. Find out more about Eilean Donan Castle here.

This beautiful castle on the Isle of Skye has been owned and occupied by the same family, the MacLeods for 800 years.  Built on Loch Donvegan from the 1200’s to the 1850’s, it is the oldest continuously occupied castle in Scotland  The current owner and resident is Hugh Magnus MacLeod, 30th Chief of Clan MacLeod.  One of the most interesting artifacts in the castle is the Donvegan Fairy Flag.  (I told you these castles were the stuff of fairy tales.)  There are several different legends about the flag.  You can read about them here.  Find out more about Dunvegan Castle here. 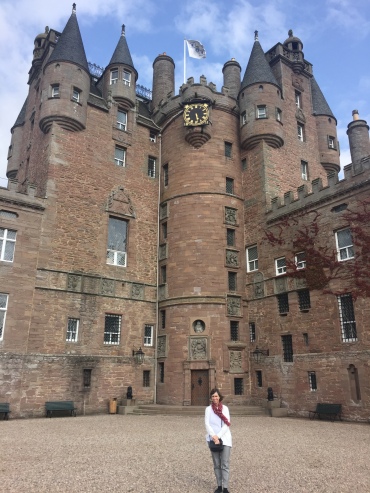 Owned by the Earl and Countess of Strathmore and Kinghorne, this castle has been the home of the Lyon family since 1372.  Close to Angus, Scotland, it is the Childhood home of HM Queen Elizabeth, the Queen Mother and the birthplace of HRH The Princess Margaret.  So, when current Queen Elizabeth went to visit her grandparents, this is where she went.  How about that for “over the river and through the woods to grandmother’s house we go”?  Our docent told us that sometimes you can see the current resident riding around on her golf cart.  Click here for a personal greeting. Really, do it.

Kellie Castle From the Garden

This castle in the Kingdom of Fife is owned by the National Trust for Scotland.  The oldest part was built in 1360.  King James VI paid a royal visit to the castle in 1573.  Special plaster ceilings were crafted to mark the event.  The interior of the castle was overhauled in the late 1800’s by the Lorimer Family.  This castle also made me think of my good friend Kelly.  Find out more about Kellie Castle here.

Katelyn and I fell in love with Cawdor Castle.  The Countess of Cawdor still lives there and unlike some of the other properties, where you see the public rooms, you were a guest in her home, in the very rooms in which she lived.  It was very warm and cozy.  It was tempting to plop down on her sofa or sit at her writing desk — which I assure you,  we did not do. 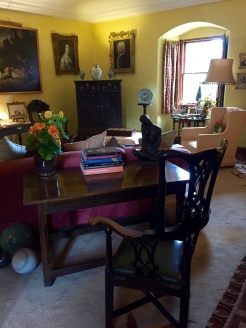 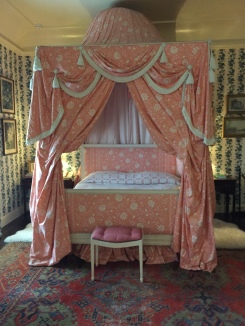 I hope you enjoyed this little tour of the Scottish Castles I visited this summer.  Do you have a favorite?  I’ll share the beautiful gardens we saw in another blog.  Perhaps in the dead of winter when we’re all starving for some color. 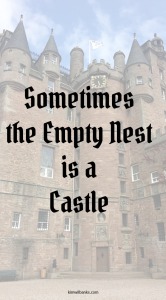 4 thoughts on “When the Empty Nest is a Castle”