Reality doesn’t always match our expectations.  I experienced this on our recent trip to Israel.  Oh, don’t get me wrong, our pilgrimage to the Holy Land was spectacular, the trip of a lifetime.  It was just one particular site that left me wanting.

One of the things I looked forward to the most on our trip was the visit to Shepherd’s Fields.  Maybe because it is the site of my favorite part of the Christmas story.  The idea of a multitude of angels announcing the birth of the Messiah to some lowly shepherds out in a field with their sheep one dark night is both terrifying and mesmerizing at the same time.  I was so excited to see where this miraculous event took place.

After visiting a workshop in Bethlehem where craftsmen made carvings of olive wood, our guide announced that our next stop would be to Shepherd’s Fields.  After that, we would end our tour of Bethlehem at the Church of the Nativity.  I imagined our bus driver would drive to the outskirts of town where we would disembark and gather in a field to read the account in Luke 2.  Perhaps there would even be some modern-day shepherds tending their sheep.

I was wrong.  Evidently Bethlehem has grown a little in the last 2,000 years.  Imagine that.  There were hills but they were covered with buildings instead of sheep.

How I imagined Shepherds’ Field

What We Saw at Shepherds’ Field

What I thought I was going to see compared to what I actually saw.

We did get to assemble in a cave that shepherds would have moved their sheep to if the need arose.  It could have been where a family kept their animals.  Who knows, it could have been the very space an innkeeper offered a weary young couple traveling to Bethlehem to be counted in a census.  Following a message about the birth of Jesus, our group sang Silent Night.  Such a sweet time. 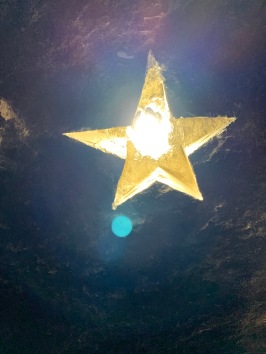 Star on Ceiling in Cave 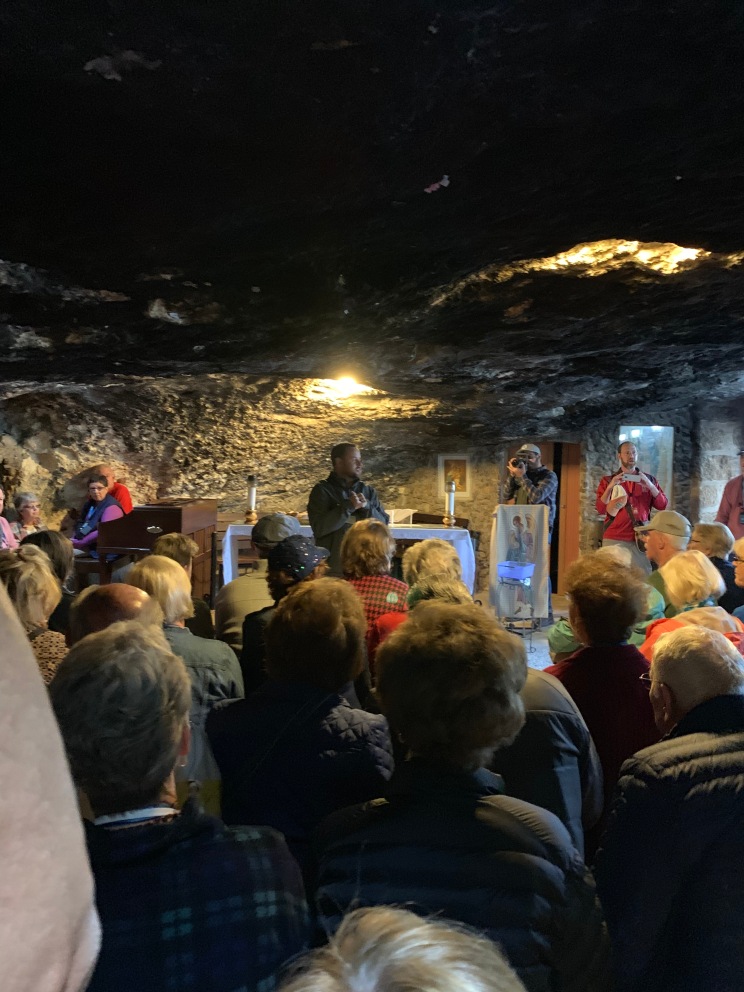 We drove through the busy streets of Bethlehem to get to The Church of the Nativity.  Bethlehem was bustling in the weeks before Christmas.  Gift Shops were hawking their wares, Christmas lights criss-crossed the streets and signs of the coming holiday were everywhere, including a billboard with America’s version of Santa Claus. 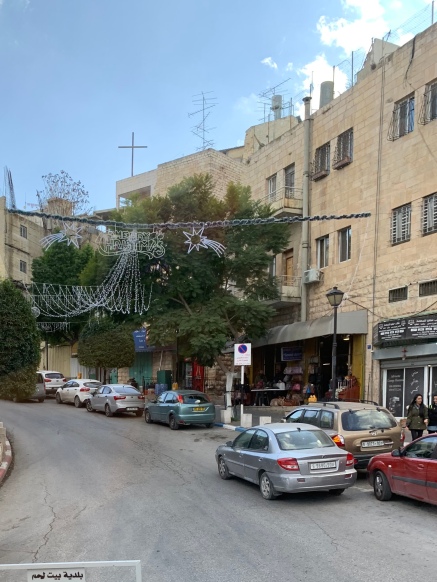 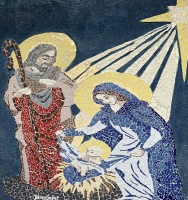 This Way to Shepherds’ Field

The Church of the Nativity is located on the traditional spot that has marked the birthplace of Christ since at least the 2nd century.  Helena, the mother of Emperor Constantine, built the original basilica over that one in the 4th century.  The current building was constructed  in the 6th century and is the the oldest Christian church in daily use in the world. The church has three parts; Roman Catholic, Armenian and Greek Orthodox.  The altar and grotto of the Nativity are both quite ornate. 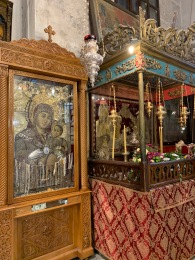 Church of the Nativity

My initial reaction to all of this was mixed.  It was awe-inspiring to be in the place where Jesus was born but I didn’t expect it to be so busy, so noisy, so commercialized.  I’ve had a couple of weeks to begin processing the things I saw, heard and experienced in the Holy Land and I’ve come to the conclusion that it is just as it should be.

One thing about visiting the Holy Land is that it truly makes the Bible come alive.  Our expert tour guide shared so much information with us that increased our understanding of the stories we have read in the Bible for years. She added so much historical, cultural and political insight to each place we visited.

Think about it. In Luke 2:1-4, we read that Ceasar Augustus issued a decree that a census should be taken of all the Roman world.  Everyone was to go to their town of ancestry to register.  Then, in verse six we learn that Mary gave birth to her baby in a stable because a guest room was unavailable.  This implies that Bethlehem was a busy, busy place the night Jesus was born.  I’m sure it was much smaller than it is now but with all of the extra people in town looking for a place to sleep, eat and take care of their animals, the level of activity and commercialism may have been similar for it’s size.  It was probably a much different scene than our Christmas carols and greeting cards imply.

The comparison of Bethlehem two thousand years ago and modern-day Bethlehem may not be entirely unrealistic.

In all of the busy, bustling activity that was Bethlehem, a Savior was born.  According to Luke 2:7, Mary gave birth to her firstborn, wrapped him in swaddling clothes and laid him in a manger.   A few verses later, the shepherds who heard the news while they were in their fields found the young family in Bethlehem.  They glorified and praised God for all the things they had heard and seen.

Mary treasured up all these things and pondered them in her heart.  If you are a mother, you get this.

I remember so clearly the day my first child was born.  It was a normal April day.  People went to work or school or any number of things people do on a normal day.  But, it was different for me.  It was as if time stood still.  Nothing else mattered on that day except that a baby was born.  A perfect baby boy. As I held my newborn son and studied him intensely, I had trouble imagining anything else going on in the world at that moment. It was only us, my little family.

I wonder if Mary felt the same way.  Did time stand still for her too?  After Jesus’s first visitors, the shepherds, left and before her adrenaline gave in to exhaustion, did she gaze at her newborn as if they were the only people in the world?  Did she trace his face with her fingertips and kiss his head?  Did he grasp her finger when she placed it in his tiny hand?  Did all of the sounds, sights and smells of that night fade away until it was just her little family?  I like to think so.

Reflecting on my recent pilgrimage to the Holy Land, I feel that even though Bethlehem and the Shepherd’s Fields were not what I expected, they were just right. It reminds me that in the busy, frantic pace of this Christmas season I can still myself and contemplate that silent night, that night divine so many years ago.  And, like Mary, I can ponder all of these things.

What are you pondering this Christmas?  I encourage you to pause, let time stand still in the midst of this busy season.

9 thoughts on “What Happened to the Shepherds’ Fields?”