As we drove around the rolling hills of Gettysburg National Military Park we had the sense we were driving through hallowed grounds.  There was a melancholy beauty to the place.  It was fitting that we visited a few days before Memorial Day, a day when we honor the men and women who lost their lives fighting in wars for our country.

We Should Go To Gettysburg One Day

A trip to Gettysburg was on the list of things my husband and I wanted to do one day.  This is the year we finally made it happen.  Years ago, I taught United States History to 8th graders in Bartow, Florida.  The Civil War was a big part of the curriculum.  I was excited to see this important historic location.

We started the day by touring the museum and viewing the Cyclorama of Pickett’s Charge, the climax of the Battle of Gettysburg.  The museum was informative and the Cyclorama impressive.  Both prepared us for our tour of the battlefield.

The Battlefield Comes to Life

We opted for a tour led by a Licensed Battlefield Guide who drove our car while explaining the 3-day battle.  Our guide, Mike,  was extremely knowledgeable and we learned a lot.  He brought the event to life.

As we drove along, I imagined men in uniform running through the fields and forests; going toward the enemy or retreating.  I imagined how it must have sounded; the explosion of cannon, gunfire from all directions, bugles blaring, men crying out either with a call to battle or in agony of injury, horses whinnying.  The smell of gunpowder, sweat and blood probably filled the air.  It must have been a terrible experience.

One of the last things we saw was the site of Pickett’s Charge.  We stood at the Union Army’s position on Cemetery Ridge and looked across the field to Seminary Ridge, about three-quarters of a mile away.  Mike described how the Confederate Army marched in a long line toward the Union’s position.  They were hit by canon and gunshot as they got closer to the Union line.  Lee lost half of his men in that charge.

Later on, after dinner, we drove around the battlefield as the sun set.  Shadows played tricks on my eyes.  Was that a soldier in the woods?  We both felt a sense of sadness and deep loss in the landscape. 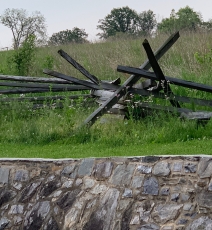 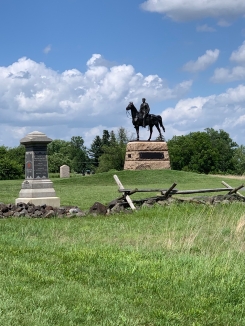 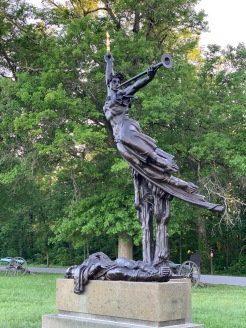 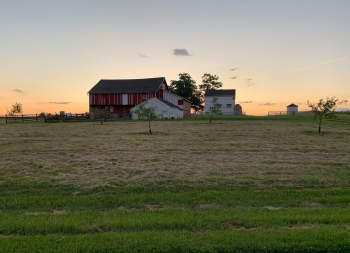 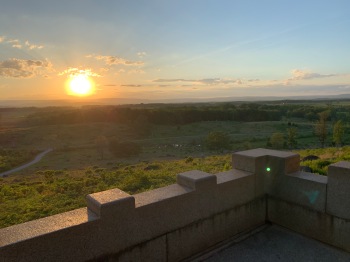 Sunset on the Battlefield

Those thoughts were on my mind when I turned on the news.  The first image was from a story about a clash between Pro-Life and Pro-Choice crowds.  The camera zoomed in on a woman holding a sign in opposition of abortion while another woman, with white hair, simply yelled expletives in her face.  No discussing the points, no reasoning, just yelling.

It made me wonder.  Did all those thousands of soldiers who died in the Battle of Gettysburg fight and die in vain?  Sure, the Union was spared, slavery ended, but are we really a united nation?  Everyone is so angry with everyone.  Pick a side; conservative vs. liberal, Republican vs. Democrat, Black vs. White, Feminist vs. traditional, faith based vs. secular, gay vs. straight, urban vs. rural.  How in the world can we be a united country if no one can get along?

In his speech before the Republican State Convention in 1858, Abraham Lincoln said that a house divided against itself would not be able to stand.  He was referring to the nation being half-slave and half-free.  He borrowed those words from Jesus Christ.  Those words are as true today as they were when Jesus said them and almost two thousand years later when Lincoln borrowed them.  Don’t you think it’s something we should consider? 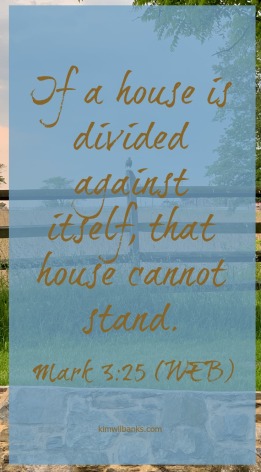