If you google 1968, you will discover that it was a historically significant year in our country.  It was the year American astronauts orbited the moon for the first time and Boeing introduced a new aircraft, the 747.  It was also a year of tragedy and conflict; the assassinations of Martin Luther King, Jr. and Bobby Kennedy and the riots in Chicago during the Democratic National Convention.  However, there is one event which occurred in 1968 you probably won’t find on the internet, though it is arguably one of the most important events of that year.  My little brother was born!

Yep, FIFTY YEARS AGO, my little brother, Andy Edwards was born.  (I was already feeling old, the fact that my younger brother is turning fifty doesn’t help.)

He was an interesting little kid.  One of his signature moves as a toddler was to make the peace sign while saying “peeeaaaacccceee”.  After all, he was born in the hippie era.  As he got older, he would only wear football shirts.  For years, if the shirt didn’t have a number on the front or back, he wouldn’t wear it.  And since he had a January birthday, he decided at a young age to have half-birthday parties.  Every summer there was another birthday party with friends, presents and cake; the works.  When Mom decided he needed a spanking, he would invite all of his friends over to watch.  Let me just say, it has been an experience being his older sister.

This fiftieth birthday of my little brother has led to much reminiscing. 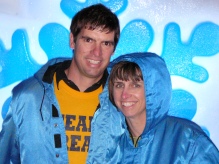 Please forgive me for:

Things For Which I Forgive You

I forgive you for:

Things for Which I am Grateful

Happiest of Birthdays to you Andy!  I hope you have many more birthdays to celebrate life, family and all the good things.  I love you much!

Coping with the chronic illness MEcfs in Midlife. Helped by Faith, Creativity, Humour, Discussion and of course, Hope!