And suddenly there was with the angel a multitude of the heavenly host praising God, and saying, Glory to God in the highest, and on earth, peace, good will toward men.

Music. What can be better than Christmas music?  It is one of my favorite things.  I’m very much a traditionalist, so I always look forward to the day after Thanksgiving when I can crank up the Christmas tunes.  If there’s a concert or cantata to attend, I will be there.

Music is an important part of the Christmas season because it is an important part of the Christmas story.  Luke 1:46-55, in the Holy Bible, records the Magnificat or song of Mary.  It is Mary’s hymn of praise which follows Elizabeth’s revelation that her own baby leapt in her womb when he heard Mary’s greeting.  Later, following the birth of Jesus, a host of angels appeared to shepherds in a field.  They praised God as they announced the birth of Christ.  The verse (Luke 2:13) doesn’t specifically say they sang but if you look up the Greek word for the word praising, the definition is joyful praise of God expressed in doxology, hymn or prayer.

Five Events in One Week

It’s no secret that I love music.  It is a theme that repeats itself in my posts.  You can read about it here and here.  That is why I was amused with myself while attending a concert with my dad last week.  I was thinking about the previous week and realized I had attended five Christmas musical events in seven days!

You Can’t Do It All

I was sad to miss an annual tradition this year.  My friend and I usually attend The Nutcracker but we were unable to this year.  We ran out of time.  We are each Mothers of the Groom and will celebrate two weddings in the coming three weeks.  Yikes!

I will also miss our traditional Christmas Eve service at church because we will be in Nashville for my son’s wedding.  Oh, well, perhaps I will find some more Christmas music there.  After all, Nashville is music city.

This Christmas season has been a very musical one.  From the five concerts I attended, to the musical specials and movies on television to the continuous Christmas music on my radio it has indeed been a musical season.  The best part is, it’s not over yet! 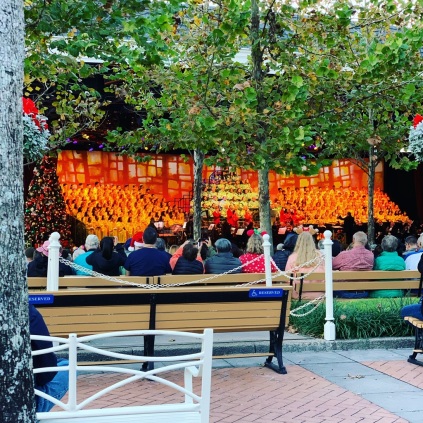 I pray that these last few days before Christmas day are full of love, joy, friends, family and music!